To listen to the full podcast episode, John Redfern | The Promise Of Geothermal Energy & The Company To Realise It, check out the Curious Worldview podcast.

Eavor’s President and CEO, John Redfern, was a recent guest on the Curious Worldview Podcast sharing his insights into the promise of geothermal energy.

Joined by host Ryan Faulkner-Hogg, the two deep-dive John’s experiences in China throughout his career, the hurdles geothermal continues to face, and what’s next for geothermal and Eavor’s advanced geothermal technology.

Redfern reflecting on his time in China

Part of the discussion allowed John to reflect on his 13 years spent in China during a major economic growth period, wherein John resided in Shenzhen, one of few special economic zones in the early 2000s.

John shares that he “ended up there by mistake”, an opportunity from a colleague to set up a Shenzen-based office. During this period, he reflects on the business-oriented and innovative culture that had yet to face forthcoming regulation, “One of my main attractions to China was you could do almost anything. We used it as a base to startup some startups”

A period of open ambition in which John himself witnessed the ability to do ‘almost anything’ from an innovation standpoint. A period of accelerated ideas lesser encumbered by regulation, later enshrining Shenzen as an economic driver in the region.

Sharing his perspective on the growth of geothermal in China, he notes their ambitions for renewables. “Geothermal, especially for heating purposes, has been growing quite rapidly in China. We’re going to have the world geothermal congress in China next year, certainly that would be good timing for us”.

How did Eavor’s closed-loop innovation originate?

During this podcast, John reminisced on the formative days of Eavor, and some of the early eureka moments between himself, Paul Cairns, and other founding members. With a vast amount of insight into building startups, the ideas originally deemed uneconomical were fostered and aligned to overcome the more clear obstacles shared by colleagues well versed in the economics of clean energy production.

The original concept was focused on repurposing defunct oil and gas wells, to utilize them as geothermal wells. “About a thousand other people, we all came up with the same idea to say, it would be great to turn those old wells, those old assets, back into geothermal wells and produce something from them”. He continued, “we could tell it was never going to scale, and the key to the energy industry is unless you have something that scales massively, you’re not part of the solution”.

In conversation with Chief Business Development Officer and co-founder of Eavor, Paul Cairns, shared his idea for two vertical wells some distance apart to be connected under the surface, creating a thermosiphon effect that is self-circulated by the temperature of the fluid.

John speaking about Paul’s original ideations, “instead of pumping water in and out of the aquifer, what if we took a couple of oil wells, drilled down, turn them towards each other, connected them, make a big ‘U’ loop, tie it back at the surface with some pipeline, couldn’t you flow the water a lot easier?”

In realizing that this model was better than expected, discovered that this process could pump itself as a result of temperature variations, creating a thermosiphon effect with a closed-loop. Upon further evaluation, they decided, “let’s spend the next 5 years if it keeps working, doing everything we need to do, every possible innovation to make this idea of the closed-loop work, and that’s how we got started”

“We used to joke, the fact that people thought we were crazy was our original barrier to entry. Now that we have slowly convinced one group after another, one individual, one company after another, including some oil companies that can evaluate our learning curve ideas, now we have to start running because now other people are chasing us.

“It all ended up being way harder than expected, but that’s pretty normal in startups. That’s actually a good thing because my original fear was were going to be able to do this, but anybody could replicate it”. He continues, “but now knowing what I know, nobody is going to replicate it.”

What is dispatchable in relation to energy?

Dispatchable energy is by definition the ability to control power output when it’s needed, and when it’s not. One of the more profound attributes of Eavor’s advanced geothermal technology, which in turn is a not a common functionality of many other renewables. Many renewables fall under an intermittent category, meaning that the ability to produce energy is varied by particular conditions on the surface, such as no wind or no sunshine.

In sharing his insights into the importance of having a dispatchable energy solution sooner rather than later, John notes “when you have something like a nuclear plant, it’s going to be firm. It will produce the same amount of energy every day and you can’t really turn it up and down easily without having a lot of complications. But what do you need right now? Right now you need a dispatchable source”, he continues “and ours, just by loosening up or choking back on that thermosiphon effect, we can change the circulation rate of the water, and we can use what we have as a big battery”.

Continuing his sentiment toward the value of the closed-loop geothermal solution, John offers an example of why the Eavor-Loop has a real opportunity to transform the energy landscape. “If our thing is 10MW capacity, that’s 240MWh per day. We can either produce that as a firm baseload at 10MW every hour, or let’s say pair it with solar, shut down the power output completely at midday when you have too much solar, and then open it up and produce twice as much in the evening when you really need it and the sun goes down.”

“There’s no other green solution that does that”

John speaks on what innovation has become for himself and other members of the Eavor team, from inception to where Eavor is today.

“We have been very lucky that we started to mine a rich vein of innovation, again it all started as ‘let’s make it a closed loop and it pumps itself’. That has led to a whole series of other questions, and that has led to other innovations.”

He continues, “there are dozens of situations where you say how do we solve this problem? We take another step forward and then we realize, the reason we have figured that out is because it would not have been valuable to anyone else, or they don’t need it, or it doesn’t fit in their operating paradigm. So because we are the first one to tackle a lot of these problems with closed-loop geothermal, we were the only ones to spend 5 years and intensively research it, and were by default, the ones coming up with all of these solutions”.

To date, Eavor’s investors and strategic partners have played a critical role in the company’s development. “Those were key investors, because not only do they understand the technology and can vet it and validate it, they’re also the ones that can implement it. Once we have a number of these (Eavor-Loops) up and running, we’re 50 people, were not going to change the world on our own drilling our own Eavor-Loops. If we can equip people like BP, Chevron, or BHP to go out and drill some of their own, using our technology, that’s fantastic, that’s how you really scale things up”.

Direct Use for Geothermal District Heating

A growing topic of discussion for the geothermal industry, and a key facet of Eavor’s strategy for the future. As it relates to China, among other nations, focusing heavily on geothermal energy for district heating, John shares his insight into the challenge of where energy is produced and where it is consumed, and the broader market for district heating using geothermal technology.

“The problem of creating energy in a different spot than where you consume it isn’t just for renewables, it’s for traditional oil and gas as well. You look at all of the oil that has been bottled up in Alberta because they don’t have a pipeline out. So you don’t want traditional energy sources in your backyard. Usually, they’re close to some resource or special asset, and then you have to get the energy from there to your house. In between them, you have the NIMBY problem, ‘Not in my backyard’.”

In speaking of direct use heating applications specific to Eavor’s technology, he notes “unlike traditional geothermal or other modern renewables, it doesn’t have to be in a particular spot. If we end up being able to drill as deep and as hot as we like, we can produce the power anywhere, especially for direct heating uses”. He continues, “If you’re doing district heating, which is one of our big markets, then you really have to locate the energy source right below the town. The fact that we (Eavor) are not reliant on any particular geology means as we develop our projects, we will eventually be able to go to any town that wants that, and just drill down. You don’t need as high of a temperature for a direct heat use like district heating than you do to generate electricity, so you can really do it anywhere, pick the location is best, and the location is best where it is consumed.”

To listen to the full podcast episode, John Redfern | The Promise Of Geothermal Energy & The Company To Realise It, check out the Curious Worldview podcast. 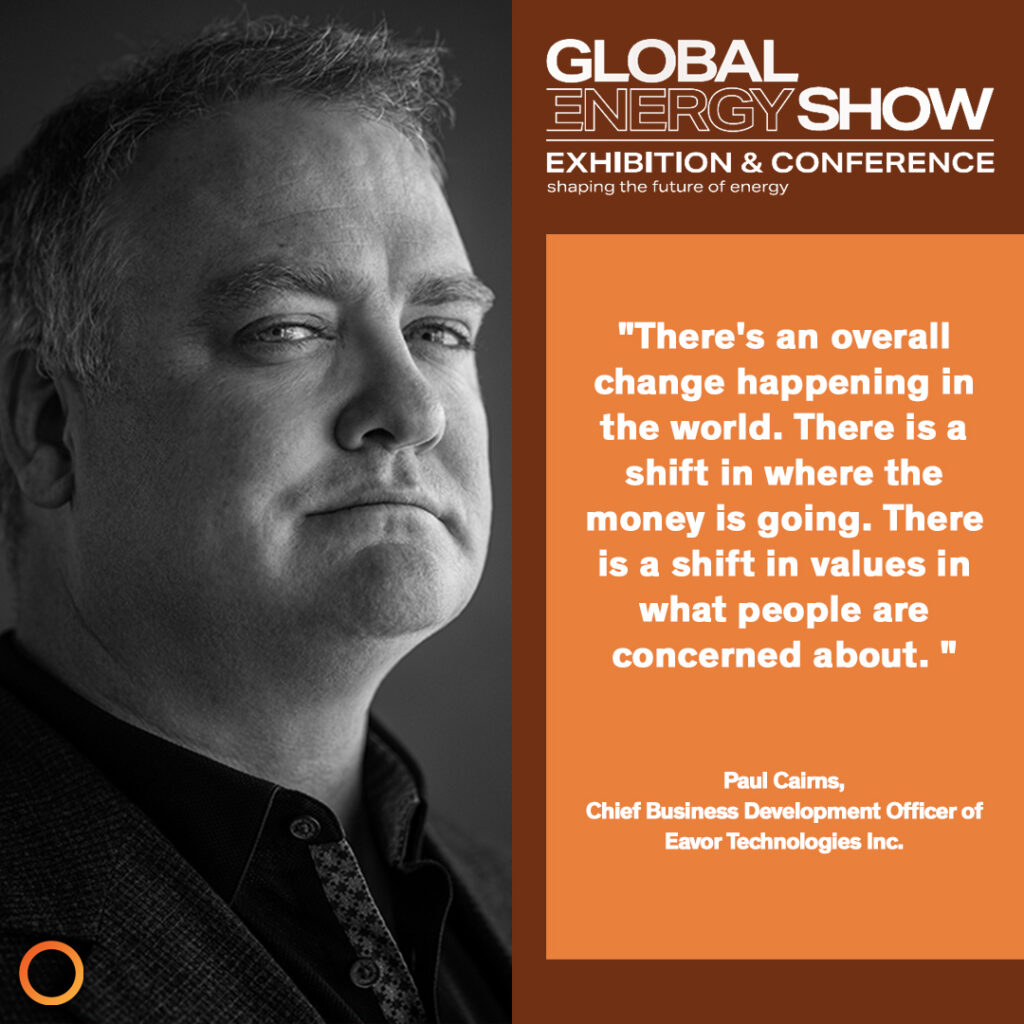