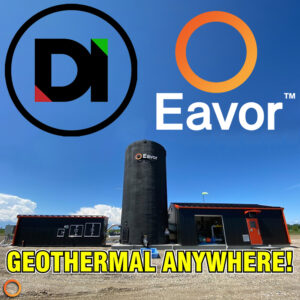 As Eavor Technologies grows, so does the need for public education on the science behind the innovative green technology – and there is no shortage of demand for informational videos, articles, and even podcasts.

Now you Know podcast hosts Zac and Jesse Cataldo interviewed Eavor Technologies specialists to better inform themselves and their tech-oriented audience about the new developments in geothermal energy.

Geomechanics specialist Anna Rogers and senior development engineer Christopher Cheng joined the podcast hosts on September 30, 2022 to discuss the innovative technology of the Eavor-Loop and answer questions about what sets Eavor apart from the conventional geothermal industry.

Covering topics ranging from solar energy to electric vehicles and everything Elon Musk, the Now You Know podcast channel was created in 2016, and in 2020 the creators released a new video podcast, Disruptive Investing.

Disruptive Investing is all about the new players in the sustainable tech industry – a category Eavor fits into well. The channel has over 55,000 subscribers, and the inquisitive minds behind the podcast asked Rogers and Cheng engaging, yet digestible, questions about Eavor and the company’s revolutionary technology.

Rogers and Cheng eagerly answered questions ranging from how Eavor is different from geothermal practices seen in Iceland that use fractures in young rock to extract hot water; to the potential downsides of conductive heat extraction, including the possibility of cooling the earth to an unlivable temperature.

Cheng’s answer to the latter is simple: “The heat death of the sun beats us to it.”

Rogers and Cheng explain the science behind Eavor’s technology in – mostly – layman’s terms; breaking down the theory of the thermosiphon effect and how it’s been proved in practice by the development and deployment of Eavor-LiteTM, and elucidating the degrees per kilometre depth formula used to gauge underground rock temperatures and the potential for geothermal heat extraction.

One important explanation noted by the hosts in their episode outro was the concept of “black-start capable” technology – meaning the Eavor-LoopTM system does not require energy input to initiate the flow of fluid inside the closed-loop pipeline. In instances where the power grid was to completely go down, such as what happened in Texas, Eavor-LoopTM technology would be able to restart the grid using dispatchable power, without needing an electricity kickstart.

Although the hosts were mildly disappointed at the lack of crowdfunding and minor investment opportunities, the overview of the interview and the subsequent episode was resoundingly positive.

”This is a company that a few years ago, no one even thought this was a possibility…It’s exciting to see out there that this is becoming true,” said Zac Cataldo.

Bonus content on Eavor is available for Investor Club Patreon subscribers of the Now you Know Podcast at https://patreon.com/nowyouknow. You can listen to and watch the full interview with Rogers and Cheng below: October 12, 2022
Load More
PrevPreviousGeothermal Resource Development Act: Where is it now?
NextEurope’s energy insecurity and the potential for geothermalNext