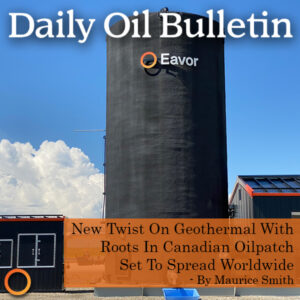 Low Hanging Fruit
Though developed and proven in Alberta, Eavor plans to take the technology first to markets where its best attributes are the best t, such as higher-priced markets in Europe, as well as isolated grids and remote communities.

Western Europe is a prime target as it presents a natural t for a technology that can produce both power and heat. The EU’s goal to be carbon neutral by 2050 necessitates getting off a prime provider of both — coal. While wind and solar can replace much of the electricity, replacing the heat is more challenging.

“The quick wins there are where you already have district heating networks and you’re trying to wean them off coal or natural gas,” said Redfern. “They want to encourage green baseload power because they’re having a hard time getting off coal. We provide that as an opportunity.”

The region is also sprinkled with shovel-ready sites for which Eavor can step in immediately — sites intended for conventional geothermal systems that turned up dry, which are more numerous then one would think, according to Redfern.

A deal with Germany’s Enex Power Germany GmbH announced in May to jointly develop heat and power projects at a brownfield geothermal site in Bavaria is a prime example. The deal involves Enex contributing existing geothermal assets for the development of Eavor-Loops.

The Enex project dates back to 2004, when it was granted a geothermal concession to develop the site. Two exploratory geothermal wells were drilled at a cost in excess of €30 million, neither of which were able to deliver enough hot hydrothermal water to enable the economic development of a traditional geothermal project.

However, both wells confirmed a geothermal gradient or formation temperature well suited for the development of Eavor-Loops and the production of electricity and commercial heat suitable for district heating and industrial processes.

Enex’s surface lease and drill pad are located in an industrial development zone with access rights for the interconnection of electricity to the local distribution grid. There is also the opportunity to potentially sell heat to the town of Geretsried, just south of Munich, for district heating.

“Given the long history of the project, the extensive prior community engagement, the existing regulatory approvals, the existing infrastructure, and the excellent reputation and relationships of Enex in the community this project is an ideal candidate for the rapid deployment of Eavor-Loop,” stated Eavor. Electricity produced will be eligible for payments under a feed-in tariff in which the German government augments the price received for 20 years. Front-end engineering and design of the project is expected to be completed this summer, with construction planned in early 2021.

“After two failed attempts to find sufficient hydrothermal water at the given location, we are absolutely enthusiastic to be working with this new innovative technology that overcomes this prerequisite for an economically viable exploitation of geothermal heat,” Robert Straubinger, Enex chief executive officer, said in a statement. “In the attempt to lower their CO footprint, this is highly appreciated and supported by the neighbouring communities.”

Eavor has about a dozen other prospects in the pipeline in Germany and others in Italy, France, the Netherlands and elsewhere, Redfern said. “There are a lot of places in Europe that have a nice, deep, reasonably hot sedimentary basin that we can use to generate both power and heat, like Germany — or in other places where the power prices are low, in the Netherlands or France, [there are] heat markets for district heating and things like that.”

Conversely, some markets are ripe for the emissions-free power geothermal can produce. Japan is looking for low-emissions electricity as it gets off nuclear, he said. “We’re looking at a bunch of opportunities there [including] one in the very shadow of [the destroyed nuclear power plant] Fukushima itself.” Other markets have made so much progress with renewables, such as California, “that they’re choking to death on wind and solar.” The Eavor-Loop is designed in such a way that output can be ramped up and down as needed, making it complementary with intermittent renewables.

In California, where the excess of renewable power is already leading to negative midday pricing, new utility-scale projects must now include some reliable elements of capacity. “We can put an Eavor-Loop right underneath [a solar farm] so there is no more surface footprint and shape our output around that solar peak,” said Redfern.