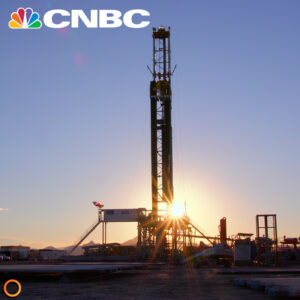 A CNBC article reporting the details of superhot rock geothermal potential was published in late October, after a compelling report by the Clean Air Task Force was released.

The article, written by CNBC climate innovation and technology reporter Cat Clifford, is full of blue text and statistics, a veritable information hub for readers interested in learning more about geothermal energy, energy policies and initiatives in the United States, and major players in the clean energy field.

The Clean Air Task Force (CATF) released the second iteration of its report on Superhot Rock Energy on October 28, with new updates as recent as November. The first paper was published in October 2021, breaking down what superhot rock is, where exploration of the resource stood at the time, and listing Eavor as a leader in next-generation geothermal energy development.

In her CNBC piece, Clifford explains how Superhot Rock is present all over the earth at various depths depending on the location. Although this type of geothermal energy varies in different geological settings, it’s more universally applicable than traditional geothermal energy capture, which is focused mainly on extracting hot water or brine from underground reservoirs.

Superhot Rock geothermal extraction strays from traditional techniques by capturing heat directly from the rock, rather than heated water that flows through underground fractures. Despite this new technique reducing exploratory drilling risks and costs experienced by traditional geothermal technology, the methods for drilling to depths close to 20 km still need to be perfected.

Oil and gas companies possess much of the same technologies and techniques required for drilling to such depths, making partnerships between geothermal and oilsands organizations a necessary catalyst for geothermal drilling advancement. Revolutionary enterprises such as Quaise Energy are exploring creative solutions like using energy to melt rock, instead of drill bits that require replacing due to intense wear from grinding.

Although advancements in drilling techniques are necessary, the CATF says this technology has the potential to be commercially viable in the 2030’s, enabling countries to take concrete steps towards net-zero targets and energy efficiency.

Canada, the U.S., and the European Union are three major examples of the more than 130 countries around the world pledged to achieve net-zero greenhouse gas emissions in the next.

Virtually universal, superhot rock and other geothermal extraction techniques not only have the potential to create baseload energy security around the world, but also greatly reduce global reliance on fossil fuels and greenhouse gas emissions.

To read the full article and learn more about superhot rock in the United States, click here.

The CATF 2022 report cites Eavor as an innovator in the development of extraction techniques that avoid the high-risk expansion of underground fractures using seismic activity – advancements vital to the scaling of geothermal energy worldwide.

Eavor’s cutting-edge Rock PipeTM fluid technology is also mentioned in the report, touted as a revolutionary development with the potential to allow for acceleration in deep well development in superhot rock conditions.

Labelled as a leader in “learning-by-doing” innovation, Eavor is making real-time strides with their first commercial heating and power project in Geretsried, Germany, and Eavor-DeepTM, the hottest, deepest directional geothermal well in history.

The project is located in the southwestern United States, and will focus on demonstrating linear costs and low risks for drilling with Eavor-DeepTM – a crucial milestone in scaling superhot rock geothermal to its global potential.