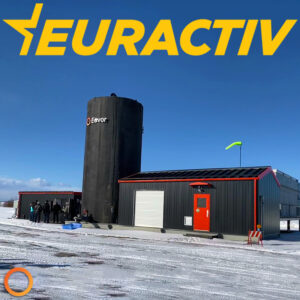 Euractiv recently featured Eavor’s closed-loop technology, the Eavor-Loop™, in an article detailing the promise it holds. In 2019, Eavor completed the prototype of a closed-loop geothermal power plant. This technology, a new generation of Advanced Geothermal Systems (AGS), connects two vertical wells with many horizontal wellbores, creating a closed buried-pipe system. These systems operate differently from deep geothermal techniques and do not require a controversial drilling process such as fracking.

Geothermal energy has traditionally only been developed in areas that meet specific seismic and volcanic conditions, such as Turkey and Iceland. Closed-loop systems can offer geothermal energy anywhere, even in cities that are sitting on deep aquifers such as in Europe.

Daniel Moelk, Germany country manager at Eavor, says: “The system provides energy 24/7, independent from weather, season or if it’s day or night. We can also dispatch the load and follow wind and solar by reducing the energy output when we have lots of wind and solar in the grid. And if these drop out, we can provide peak load.”

These systems are also beneficial with their ability to redeploy technologies and expertise from the oil and gas industry. Oil and gas companies have accumulated extensive experience in drilling wells and exploring geological formations, and industry experts believe they could use the vast data in the geothermal industry. Some of these companies have already begun investing in geothermal, such as BP and Chevron.

There is pushback, however, in deploying closed-loop technology due to the bad reputation of traditional geothermal. The fracking and high-pressure water methods have caused public rejection in places like France where these projects have caused tremors in the past.

Moelk says, “We cannot cause any earthquakes, and we cannot contaminate drinking water.” He stresses that, “Because we are not connecting to any hydrological aquifers, we have eliminated the risk of a seismic event during drilling.”

Marit Brommer, executive director at the International Geothermal Association (IGA), says. “If there’s one thing that oil and gas is good at is exactly that: it is the risk management and the de-risking of the subsurface where the oil and gas industry has so much more knowledge of because they have drilled millions of wells.” Eavor’s Experts on the Thermodynamics of the Eavor-Loop™